Name: Circuit El Alya
Kilometres: 56 km
Distance: 56 km
Difficulty level: 3 (1 very easy/ 5 very difficult).
Tourist spots: El Alia Wind Park.
Information and suggestion: the suitable bicycles for this route are mountain bike and city bike.
ITINERARY
We begin our tour by visiting the city of Bizerte, which is on the Southeastern edge of an isthmus, at the
Northern shore of the strait, connecting the sea to the Bizerte Lake. It has a rich and varied coastline, composed by
cliffs and coves at North, a scenic road at East and, in the South, by sandy beaches surrounded by pine tree. The route continues towards the region of El Alia, passing through the regions of “Menzel Jemil”, “Hippyhob” and “Hariza”. El Alia already existed in Roman times. This city is famous for its oldest part, located at the top of the Hill (Jebel H ‘ kima), and boasts beautiful monuments such as the Great Mosque, a few well preserved mausoleum and the new city that develops among the plains that surround the old city. In the mountains above the town, there is a wind park capable of generating over 50 megawatts of electricity. The tour continues towards the Metline area, a 360°promontory, which opens to the Mediterranean and to a vast green and hilly landscape. It is a Tunisian peninsula, with a coastline of over 6 km, deserted beaches, coves and clear waters. We end our tour by visiting the Remel’ s forest, stretching over vast expanses of sand forming sand dunes or fossils, which climbed the hills, along the Coast of Bizerte’s gulf. This forest, composed mainly by pines, eucalyptus trees and mimosas, offers attractive scenery to its visitors and for this reason is called the “Forest of pleasures”. 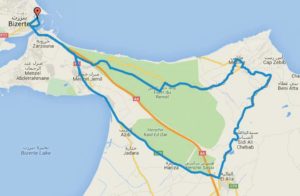